In which my life remains reassuringly surreal

January 25, 2015
On Friday I flew a military jet, which is not something I expected to say, well, ever, really.

Uh. Caveats. First, "military"; it was an L-39 Albatros, widely used as a trainer jet, although "it has also flown combat missions in a light-attack role," so. Second, "flew"; I only took the stick for a few aileron rolls and sharp (~4G) turns. The actual pilot, "Sticky," a former Thunderbird and current precision-jet-team air-show pilot on the Patriots Jet Team, controlled throttle and rudder the whole time.

But still. I was six thousand feet up in the sky, moving at circa 500 km/h, in control of a small and highly maneuverable jet plane. It was exhilirating. It was adrenalinizing. It was also hard on my gut, in a cumulative way, and I very nearly vomited as we finally banked to land; but even if I had, it would have been so worth it.

(Doing so is apparently not uncommon. After the formal briefing from Sticky, "Fidel" -- the actual owner of the jet -- approached me to advise me on the vomit protocol. Which is: first, use the "lunch bag" tucked into one of the flight suit's pockets; if that isn't viable, pull out the collar of the shirt beneath the suit and puke down your own chest. That way you don't get a mess all over the canopy and the instruments.)

How did this happen? Well. Some time ago, in Montreal, I befriended Simon Law. Because of him, some years ago I wound up writing an article for Reader's Digest about his boss, former Zero-Knowledge CEO Austin Hill. Because of that, I wound up writing a few pieces for TechCrunch about Hill's new Bitcoin startup. One in particular caught the eye of "Fidel," a software guy and Bitcoin evangelist who recently sold a startup to Intuit, used the proceeds to buy an L-39 and brand it as the Bitcoin Jet, and invited me to come out and fly in it. And, I mean, how could I say no?

I didn't realize until after I drove out to Byron that I would not just fly in it but actually fly it myself, sort of, briefly.

Byron is only an hour's drive from San Francisco but feels almost like a different nation; it's rural America, horses and rusting farm machinery, albeit with ridgetops lined by wind towers as far as the eye can see, and the odd little wealthy community of Discovery Bay just to the northeast, "the Venice of the East Bay," basically a huge square subdivision shot through with canals that connect to the Sacramento Delta, so that nearly every house has a dock and boat which, in theory, can head straight out to the Pacific without pausing for permission.

I didn't go to Discovery Bay, though. I just flew over it. 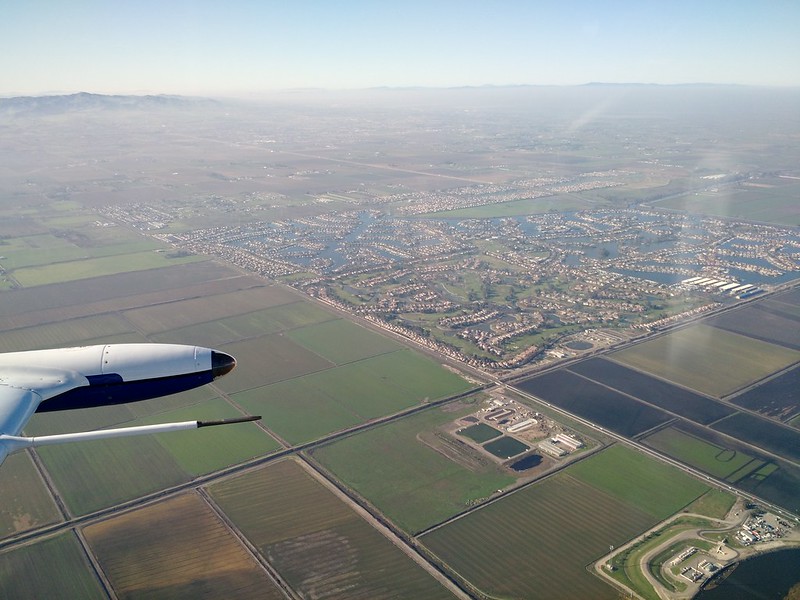 First we briefed. Sticky takes flying very seriously, and strongly believes in "plan the flight, fly the plan." I rehearsed the bail-out protocol while on the demo seat in the hangar. This L-39 doesn't have ejection seats, so that protocol was: pull the lever to disconnect my harness from the seat, pull the lever to unlock the canopy, then Sticky inverts the plane, then I force myself out while it's inverted, and then I pull the D-ring for the parachute attached to the harness. Easy as pie, right?

Then out to the plane itself: 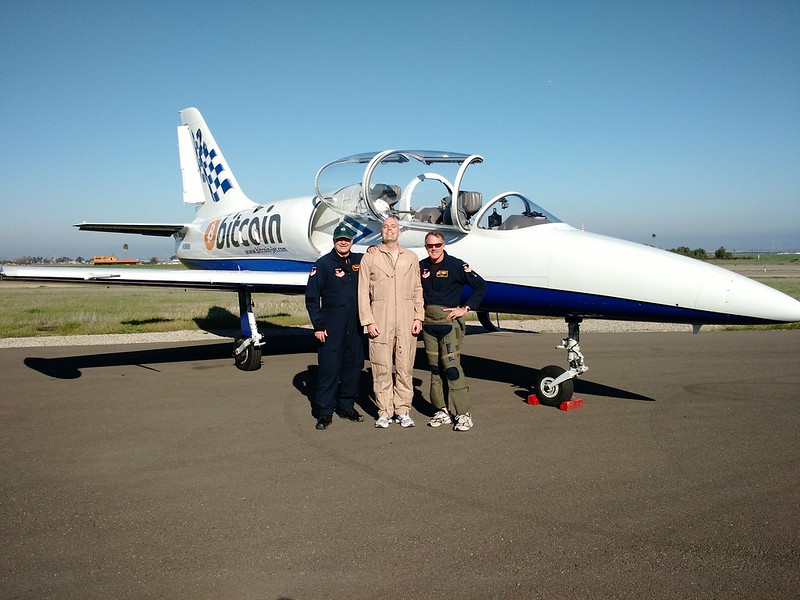 Yours truly with Fidel and Sticky.

I boarded and got strapped in by the crew chief. We tested the helmet radios (mine was slightly wonky, but if it was actually touching my lip it worked fine.) 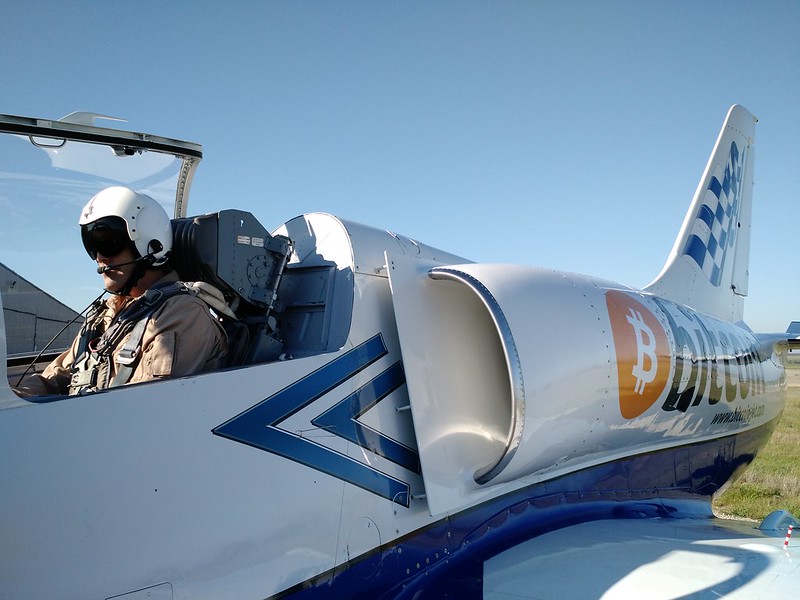 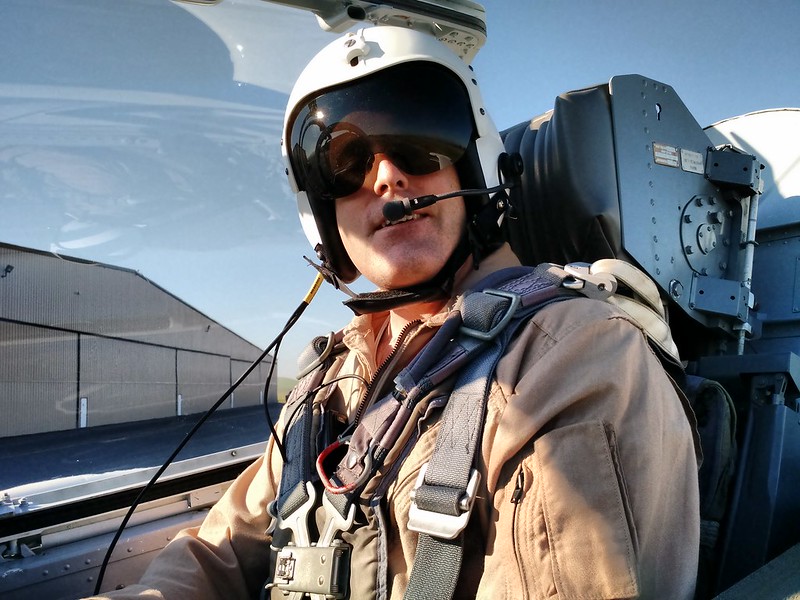 Then Sticky fired up the starter engine, which fired up the main engine. (Most US military jets require massive starter carts to get going; the self-sufficient nature of the L-39 is a pretty significant advantage for casual/personal use.) We taxiied down the runway, got a visual/radio check on other airplanes in the area -- there's no control tower at Byron, pilots just talk to each other to avoid collisions -- lined up, and zooooom, away we were, lifting off smooth as silk...

...for about fifteen seconds, after which we broke right, i.e. turned edge-on to the ground and banked hard, on a dime. Like going sideways on a roller coaster. Indeed much of the aerobatics to follow felt a bit like a roller coaster, albeit with movements that were simultaneously much sharper and much smoother, and a thrillingly disconcerting sense of ad-lib freedom.

Here's a shot of the instrument panel. Note the occasional Cyrillic. (This was an active-service Ukrainian Air Force jet until 1982.) 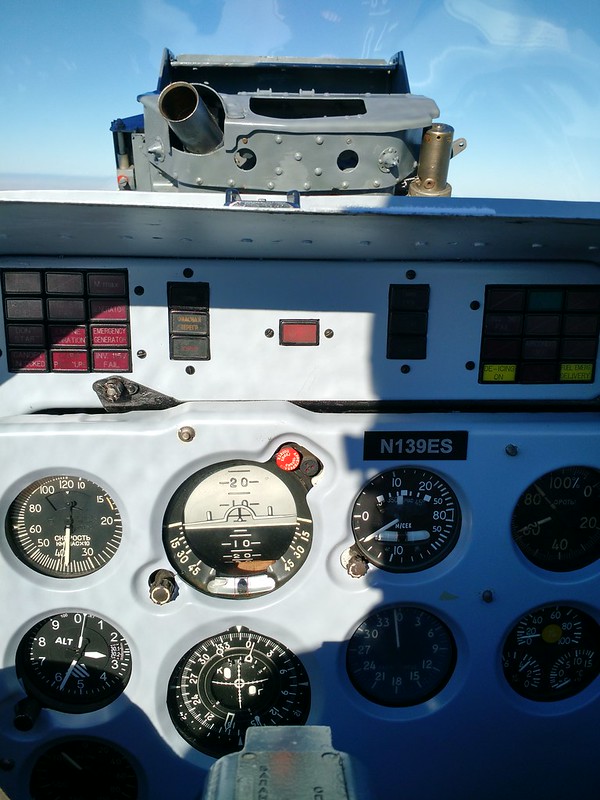 So. We flew out to so-called Bacon Island, empty territory near Discovery Bay. Below us a crop-dusting biplane seemed to be crawling along no faster than a car. (L-39s move so much faster than most other airplanes that fly out of Byron that they have to be quite careful.) We did a couple of hard turns on either direction; then Sticky passed the aircraft to me (this is done with maximum communication-- "Put your hand on the stick." "My hand is on the stick." "You have the aircraft." "I have the aircraft." -- for obvious reasons.) and whee, I did the same. Pulling 4Gs you can actually feel your lips wobble, just like the movies, and although I was holding my breath and tensing my body to increase my blood pressure, I got, I think, just the beginning of the sense of what it is like to gray out.

Then we did aileron rolls, same procedure -- him first, then me, then a double. Which was the end of my flying, alas. Then we did a couple of loop-the-loops, floating inverted at the top of each with the horizon coming at us from above. Then we simply rolled over and flew inverted for about 20 seconds, hanging in the straps with the sky below us. Then we did a barrel roll around Mount Diablo, which looms over Discovery Bay -- 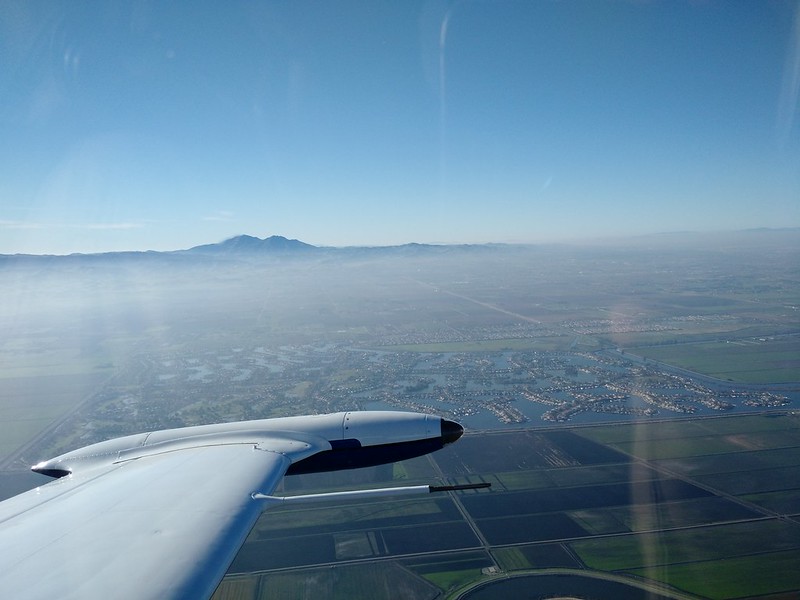 --which, double alas, was about the point at which my belly ceased to think that this was fun.

So I was kind of tightly gripping my knees and breathing deeply as we returned to Byron, waited for the runway to clear, kept an eye on the hawk that one of the other pilots reported to us, did a touch-and-go landing, banked around again, and landed. Apparently after N flights your body grows accustomed to things and the motion sickness ceases to be a problem, where N is highly variable depending on the person.

Regardless. It was a surreal, awesome, and incredibly fun experience. Not least because Sticky, Fidel, and their crew chief ("Ponch?") were great, super-friendly and super-professional. And the next time I have ten thousand spare dollars and six spare months, I intend to begin to acquire a pilot's license.

Kurt Grosse said…
This is one of the things I miss during travels - getting to see amazing things like this. Thank you also for posting these wonderful photos. Here are the other places I want to see - https://HomesForSale.Vegas/southern-nevada/ when it's easier to travel again. Until then, keep safe!

Popular posts from this blog

How to rent a car

June 30, 2008
1) Get a driver's license. These are remarkably useful things to have, especially in North America. 2) Get a credit card that insures rental cars against collision and loss. Such cards often charge an annual fee, but will pay for themselves if you rent as rarely as once a year - buying that insurance from the rentacar company often costs ~$15 per rental day. Make sure that card is paid up, as the insurance may lapse if you're past due, and bear in mind you have to use it to rent the car. 3) Book online, in advance, preferably with at least one Saturday-night stay. I generally use Expedia to comparison-shop the various major chains, then go to the cheapest chain's corporate site and book a car there. I rarely wind up paying more than $25/day. 4) You don't need to provide a credit card number to rent a car, so feel free to book more than one, just in case. 5) Save money when you book. The bewildering rentacar business model includes all manner of "promotion codes
Read more

March 23, 1998
Marooned, but the natives are friendly. Truck Africa remains strictly hypothetical, but we've been adopted by the good people of Bukima Africa, another trans-African group. Hopefully tonight/tomorrow. Chronological report: moonlit hustle thru Brixton to a Tube train's thankfully-reopened doors. 7AM passport chaos. Met Heidi, gave her her passport, recognized by Tony on embarkation. Touchdown on Gibraltar, and the Rock rearing up into most of the sky from the doorway of the plane. Hike way across airport runway - red lights that are never run - to tiny downtown. Shopping and money-changing and roving up Main repeatedly. The more we wait, the more the truck doesn't appear. Sleep deprivation and heat lead to a miasmic ferry journey to Tangier. The Pillars of Hercules on either side. Woke and climbed decks - wind of the Atlantic in my hair, broken chains of light along both sides, ship surging through the dark water. A bolt of red wrapping paper, caught and tossed into the s
Read more

June 28, 2022
This blog is a bit of an ancient artifact cast in amber these days, but I thought I should officially note somewhere on my authorial site that I have a new novel coming out from a major publisher next year. Specifically, my everything-and-the-kitchen-sink speculative fiction novel Exadelic will be published by Tor Books , the world's pre-eminent SF publisher, in 2023. I'm pretty excited to finally be an SF author after a lifetime of reading and discussing the genre. It's a weird monster of a book, made of spoilers, and I'm still figuring out how exactly to talk about it, but for now: Philip K. Dick meets Michael Crichton in this tale of programmable reality. When an unconventional offshoot of the US military trains an artificial intelligence in the dark arts that humanity calls 'black magic,' it learns how to hack the fabric of reality itself. It can teleport matter. It can confer immunity to bullets. And it promptly decides that our protagonist, obscure Sil
Read more